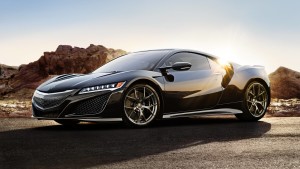 Coming soon for drivers in the Westmont, Naperville, Aurora, and Wheaton area, the 2017 Acura NSX stands as the newest titan in the world of supercars. With a thrilling four-part engine that offers enough power to challenge any of the more well-known vehicles on the scene, the 2017 NSX is unbelievably powerful. Read on to find out more about its jaw-dropping speed on the track!

Just How Fast is It?

Constructed with three electric motors and a mid-mounted twin-turbo 3.5L V6 engine, the 2017 Acura NSX delivers an astounding 573 horsepower. It can reach nearly 40 miles per hour and still run silent, and it offers a top track speed of 191 miles per hour. And with 476 lb-ft of torque, the NSX accelerates from 0 to 60 in under 3 seconds, which makes it one of the quickest street-legal vehicles off the line. This power, plus the Acura Super Handling All-Wheel Drive, means the 2017 NSX won’t just roar, but it will have the finesse and nuance to utilize that raw force.

Take a Look at the Specs

Don’t just take our word for it, though. Take a look at the hardware that makes the 2017 Acura NSX such a player in the supercar class:

Learn More About the 2017 NSX and its Top Speed Today!

If you’re a driver in the Westmont, Wheaton, Naperville, and Aurora area and you’d like to learn more about the 2017 Acura NSX, contact us online at Continental Acura of Naperville or by phone at 630-608-4734. You’re also welcome to stop in to see us at 2275 Aurora Ave. in Naperville, IL!